St. Francis de Sales School, founded by the Dominican Sisters of Houston in 1918, has served the Riverside community continuously since that time. The school began with thirty-five students in a house. In 1924, four classrooms were built on the present site, and more rooms were added. The first class graduated in 1925. St. Francis was both an elementary and high school (all girls) until 1972 when it merged with Notre Dame, the boys' high school.

In the early days, the neighborhood, now court and government buildings, consisted mainly of single family homes. Beginning in the 60's, land was taken for government buildings, and in the 90's, courts began springing up. We now have courts on two sides, and the rear of the school backs up to the freeway. Because of our downtown location, next to the 91 freeway, we serve many parishes whose parishioners work for various government offices. We also serve those who commute to Los Angeles and Orange Counties as we have easy access to both on and off ramps of the 91 freeway. 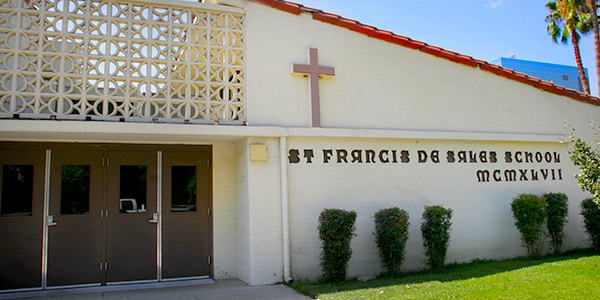