Most Reverend Alberto Rojas was born January 5, 1965 in Aguascalientes, Mexico, a small state in the central part of the country. His parents are Fidel Rojas (deceased) and Maria De la Cruz Garcia. He has three sisters and four brothers.

Bishop Rojas was raised in a devoutly Catholic household and attended Catholic elementary school and high school in his community. He heard the call to the priesthood in his early teens and entered the Diocesan Seminary of Santa Maria de Guadalupe in Aquascalientes at the age of 15. During his seminary formation in Aguascalientes he also attended Colegio de Ciencias y Humanidades.

Following a visit with family members in California, Bishop Rojas made the decision to complete his seminary formation in the United States. He entered the University of St. Mary of the Lake Seminary in Mundelein, Illinois where he would complete his theological studies and earn a master’s degree in Divinity. He was ordained a priest of the Archdiocese of Chicago by Francis Cardinal George on May 24, 1997 at Holy Name Cathedral in Chicago.

In the first years of his priestly ministry, Bishop Rojas served as Associate Pastor of St. Gregory the Great parish and then St. Ita parish in Chicago. “I was involved in many pastoral programs and doing ministry with people of all ages from many cultures was a great learning and joyful experience,” he recalls of his years as a parish priest. In 2002, Cardinal George asked him to join the faculty of the University of St. Mary of the Lake Seminary where he taught for the next eight years.

He was ordained a bishop on August 10, 2011 at Holy Name Cathedral and is the only man that Cardinal George ordained both a priest and a bishop. He chose as his Episcopal Motto, Nos basta el amor de Dios (God’s love is all we need).

In his service to the Archdiocese of Chicago as Auxiliary Bishop, Bishop Rojas served as the Episcopal Vicar of Vicariate III and later Vicariate I. He worked extensively in Hispanic ministry, serving as Cardinal George’s Liaison to Hispanic Catholics and the Archbishop’s Delegate to Consejo Pastoral Arquidiocesano Hispano-Americano. At the national level he has served as a Spiritual Assessor for the National Catholic Association of Diocesan Directors for Hispanic Ministry (NACDDHM).

Bishop Rojas has served on five committees of the United States Conference of Catholic Bishops – Catholic Home Missions, Hispanic Affairs, Liturgy, the Church in Latin America and, most recently, V Encuentro as the Lead Bishop for Region VII.

On December 2, 2019, the Apostolic Nuncio to the United States announced that Pope Francis had appointed Bishop Rojas as the Coadjutor Bishop of San Bernardino.

Reflecting on his journey as a bishop at the time of his appointment as Coadjutor, Bishop Rojas stated, “Becoming a bishop has been a powerful, humbling, and learning experience because I never thought I would be one. However, in serving the people of God along with my brother priests, religious sisters, parish leaders, other auxiliary bishops, Cardinals, lay ecclesial movements and lay people in general, I have become more aware of who we are as Catholic Church. There is a beauty and a challenge in becoming part of the Church Jesus Christ founded once we understand the purpose of His mission which is the salvation of souls. But we also know Jesus is in charge, He is with us, and has given us the Holy Spirit to lead our steps along the way.”

Bishop Alberto Rojas became the Third Ordinary Bishop of the Diocese of San Bernardino on Dec. 28 when the Vatican announced that Pope Francis had accepted the resignation of Bishop Gerald Barnes, signaling his retirement. 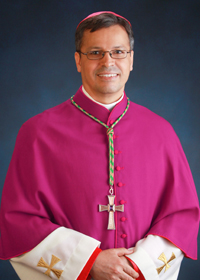 Bishop Rojas’ Coat of Arms is composed of two sections. The main (lower) section is wavy bars of two shades of blue, to represent water, and therefore to honor the Blessed Mother in her title of St. Mary of the Lake, patroness of the seminary at Mundelein where the bishop studied as a seminarian and later served in the faculty for eight years, and also his home state of Aguascalientes ("hot waters") in Mexico.

Upon this field is a silver (white) representation of the gate at the entrance to the bishop’s home city in Aguascalientes, with a fleur-de-lis in the foreground, to honor his mother, Maria, and also the Blessed Mother Mary. In addition, on the blue field are five golden (yellow) stars, which combined with the background remind us of the mantle of Our Blessed Mother, in her title of Our Lady of Guadalupe, Queen of Mexico and Empress of the Americas.

The upper portion of the design, known as a “chief,” is gold (yellow) on which is issuant from the base a red sunburst. This sun is to represent the Son, who shines upon us all as we endeavor to do his will.

For his motto, Bishop Rojas has selected the phrase, and presented it in both Spanish and English, “God’s love is all we need.” In this phrase, Bishop Rojas expresses that with the Lord, Jesus Christ, the love He gives to all his children is all that any of us need to achieve eternal life. 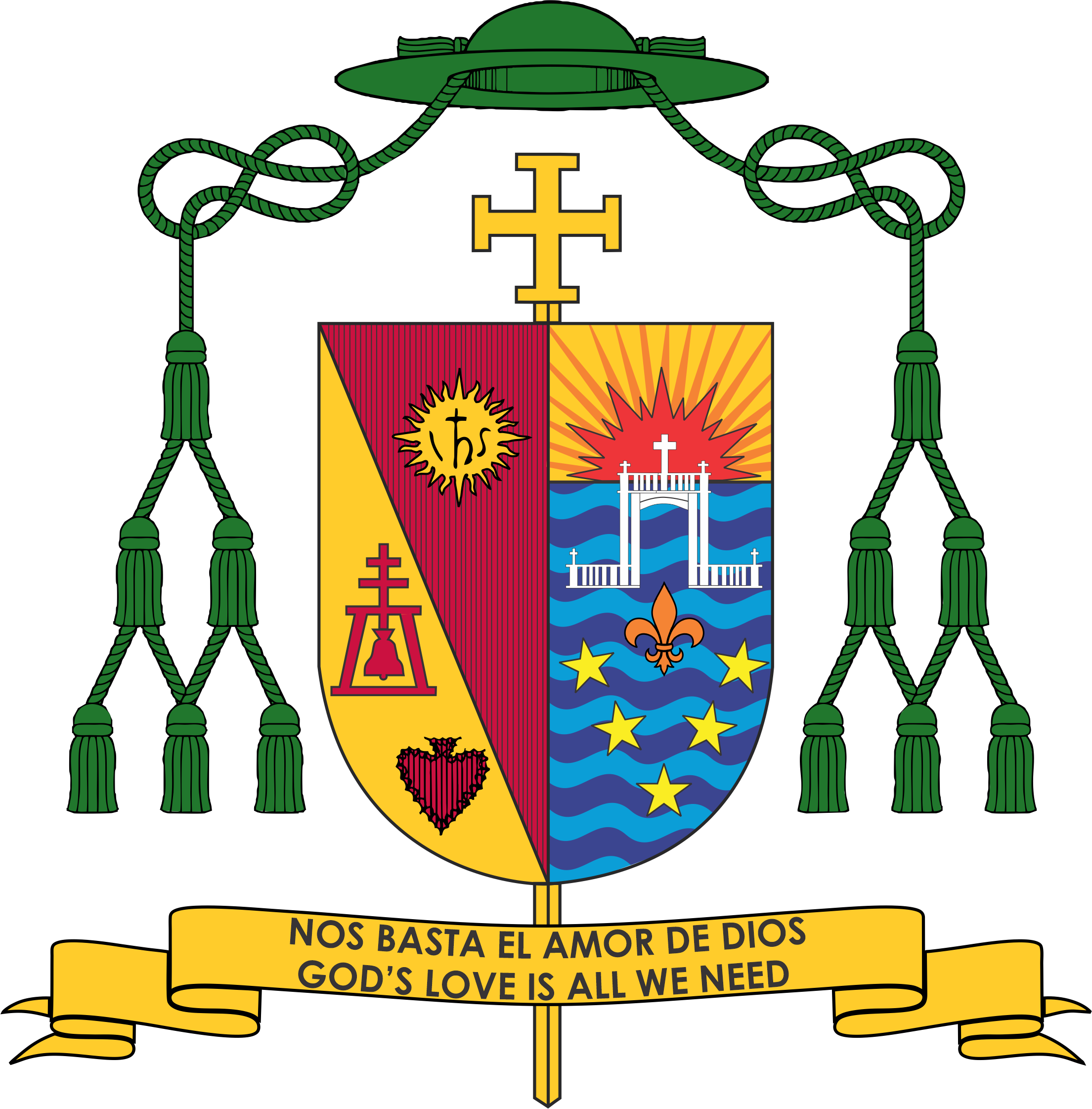 "God's Love is all we need"
For his motto, Bishop Rojas has selected the phrase, and presented it in both Spanish and English, “God’s love is all we need.” In this phrase, Bishop Rojas expresses that with the Lord, Jesus Christ, the love He gives to all his children is all that any of us need to achieve eternal life.