Most Reverend Gerald Richard Barnes was born on June 22, 1945 in Phoenix, Arizona. His parents, George and Aurora, both deceased, moved to Los Angeles when he was one year old. He and his five brothers and one sister grew up in the East Los Angeles area of Boyle Heights where his family owned a grocery store. Each of the children helped in the operation of the store.

Bishop Barnes attended public schools with his religious education overseen by Our Lady of Victory Missionary Sisters (Victory Noll) at San Basilio Center on Fetterly Avenue. He graduated from Roosevelt High School in Los Angeles and went on to attend California State University, Los Angeles where he earned a Bachelor’s Degree in Political Science in 1967. After attending seminaries in St. Louis, Missouri and in Dayton, Ohio, he enrolled in Assumption-St. John Seminary in San Antonio, Texas.

On December 20, 1975, Bishop Barnes was ordained a priest for the Archdiocese of San Antonio by Most Rev. Francis J. Furey. In 1989, he was named an honorary prelate with the title of Monsignor. In January, 1992, he was appointed as the first auxiliary bishop of the Diocese of San Bernardino by Pope Saint John Paul II. His last assignment before being named auxiliary bishop was rector of his alma mater, Assumption-St. John Seminary in San Antonio.

After his episcopal ordination on March 18, 1992, Bishop Barnes assisted Bishop Phillip Straling in conducting parish visitations, celebrating confirmation liturgies, and attending Diocesan and community functions. Following the June 1995 transfer of Bishop Straling to the reconstituted Diocese of Reno, Bishop Barnes served as administrator of the Diocese of San Bernardino until Pope Saint John Paul II appointed him diocesan bishop on December 28, 1995. On March 12, 1996, before a crowd of over 2,500 people, he was installed as the second bishop of the Diocese of San Bernardino.

With over 27,000 square miles and over 1.7 million Catholics, Bishop Barnes is chief shepherd to one of the fastest growing dioceses in the nation. In addition to the leadership of his local church, Bishop Barnes is the past chairman of the United States Conference of Catholic Bishops' Committee on Migration and Refugee Services, and past chairman of the USCCB Committee on Hispanic Affairs. He also previously served on the USCCB Administrative Committee, the Communications Committee, and various other committees. He is a past board member of the Mexican American Cultural Center and of Assumption Seminary, both in San Antonio. In 2007, Bishop Barnes was presented with the OHTLI award by the government of Mexico for his service in working with citizens of Mexico living in the United States.

Per Church law, Bishop Barnes submitted his letter of resignation to Pope Francis on June 22, 2020 his 75th birthday. He had been informed by the Apostolic Nuncio to the United States, Archbishop Christophe Pierre, that his time as Ordinary Bishop of San Bernardino would be extended up to a year beyond his retirement age.

On Dec. 28, 2020 the Vatican announced that Pope Francis had accepted the resignation of Bishop Gerald Barnes, signaling his retirement.

His episcopal motto is, “Amar Es Entregarse”, “Love is the Total Giving of Oneself”. 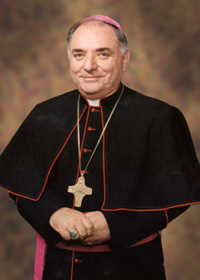 The Coat of Arms of Bishop Gerald Richard Barnes displays a field of red with a band of silver at the top. Bishop chooses red as the color of love, zeal, and fiesta, the celebration of life. He thinks of red as the color of the Southwest sunset, a reminder of his birth in Arizona, rearing in Southern California, and years of service in South Texas. The color silver in the chief of the shield acknowledges his ancestral roots: his grandparents and great-grandparents worked the silver mines of Northern Mexico (Sonora) and Southern Arizona.

The basin and towel are symbols of service, following the example of Jesus who washed the feet of the apostles. “As I have done, so you must do” (John 13:15). The green and red design of the basin and towel speaks again of the Southwest and emphasizes Bishop’s roots and his ministry to the people of the region. In using this symbol, Bishop also pays tribute to his mother and father who were models of hospitality and service, always ready to welcome into their home the stranger and those in need.

On the base of the shield is blazoned a tilma in gold and three red roses with green leaves and gold seeds. This is the tilma of Juan Diego spilling out the roses sent by Our Lady. In displaying this charge, Bishop places himself at the service of and under the protection of the Virgin of Guadalupe, proclaiming himself a Son of Guadalupe.

The motto further emphasizes Bishop’s aspiration to give himself in wholehearted service to the people through his priestly and episcopal vocation. He repeats the theme of his presbyteral ordination, Amar es Entregarse, “Love is the total giving of oneself.”

Behind the shield is a gold sword with a hilt in the shape of a cross. Above the shield are the green hat and six tassels on each side denoting the rank of Bishop. 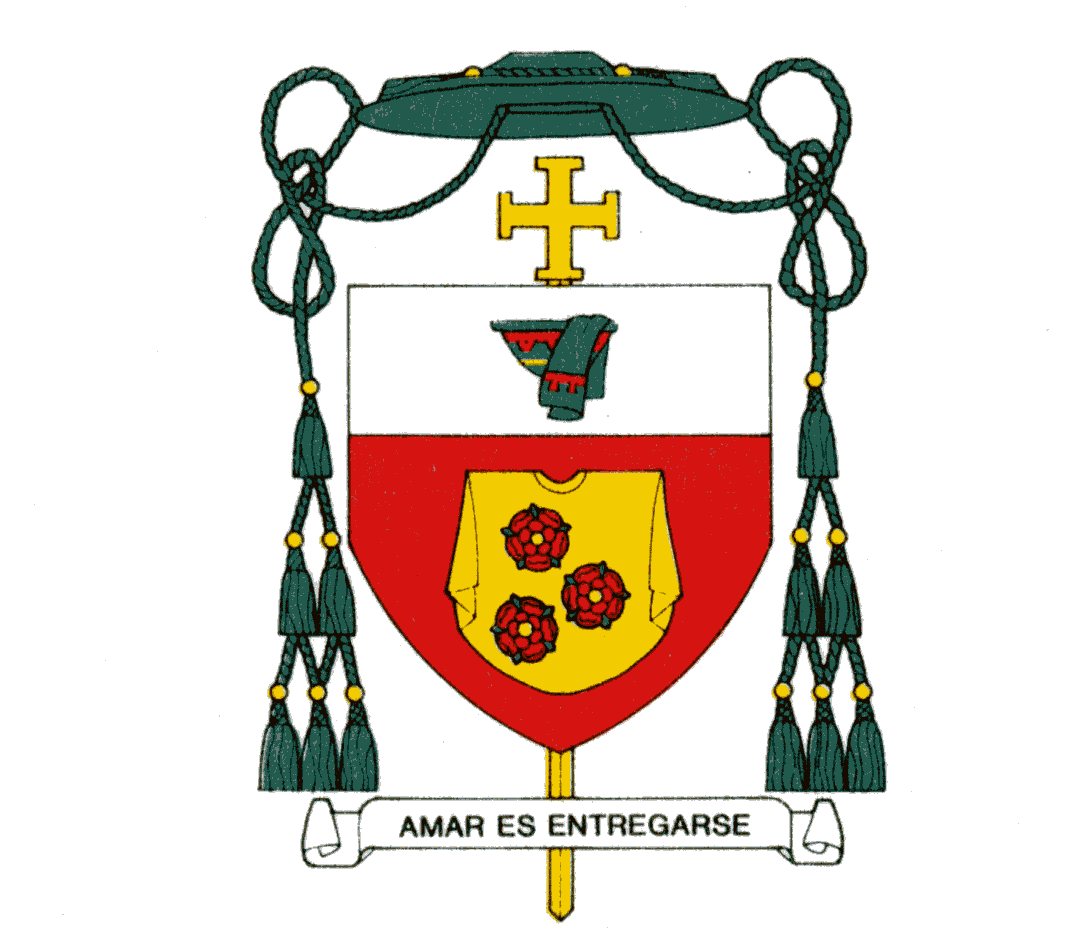