San Bernardino native Phillip F. Straling was ordained as the founding Bishop of the Diocese of San Bernardino on July 18, 1978 in what became the second to last Episcopal appointment made by Pope Paul VI. It was only fitting that someone with such strong ties to San Bernardino was chosen to lead the newly formed diocese. Bishop Straling was baptized in Holy Rosary Church, where his parents had been married and where he would eventually serve as pastor.

Bishop Straling was ordained a priest for the Diocese of San Diego on March 19, 1959. After serving 11 years in the Newman apostolate in campus ministry, he served as executive secretary of Synod II, a grassroots consultative effort to establish procedural guidelines for the San Diego diocese. In 1976 he was called back to San Bernardino to serve as pastor of Holy Rosary Parish.

As the first Bishop of San Bernardino, Straling faced the challenge of creating a sense of unity in the vast and diverse new diocese by employing a collaborative leadership style. From the start, he was also challenged to find new ways of shepherding a fast-growing diocese with limited personnel. Thus, empowerment of the laity was also a theme of his episcopacy. In parishes and schools, Bishop Straling appointed sisters and laypersons to leadership positions, including administration of parishes. He established a Diaconate Program in both English and Spanish, and launched the Straling Leadership Institute in 1980 to train laypersons in church leadership.

Under Bishop Straling's leadership, the Diocese of San Bernardino grew from about 235,000 Catholics to more than 800,000. The number of parishes grew from 85 to 105. 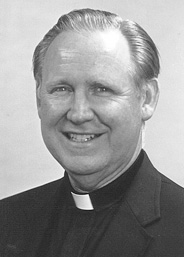 Dennis Patrick O’Neil was ordained as the second Auxiliary Bishop of the Diocese of San Bernardino on March 27, 2001. He came to the diocese after 34 years of priestly ministry in the Archdiocese of Los Angeles where he worked closely with many ethnic communities including Hispanics, Vietnamese and Native Americans. He helped to revitalize the poor, immigrant St. Thomas the Apostle parish in the Pico Union area of Los Angeles. His episcopacy in the Church of San Bernardino was marked by a close involvement in parish-level ministries. Bishop O’Neil also continued his lifelong ministry to promote the diversity of the Catholic Church, serving as director of the diocesan Office of Ethnic Affairs. He was returned to God on October 17, 2003.

Bishop O’Neil’s Episcopal motto was “Amate Invicum,” a translation of from St. John’s Gospel call to “love one another.” "It is the call to live out those words, which make Christians different and which has to be the central point of our lives as we journey toward all that God has planned for us," he wrote. 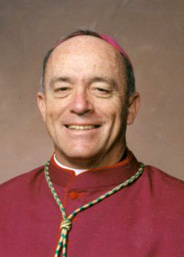