Established in 1897, Sacred Heart Academy holds the honor and distinction of being the oldest Catholic school in the Diocese of San Bernardino. It began with an enrollment of 12 students. Because there was no school building, classes were held in the corner of Sacred Heart Church. At the request of Sacred Heart Pastor Fr. Thomas Fitzgerald, Ursuline Sisters from Pittsburgh, Pennsylvania were asked to be teachers. In the summer of 1898, the Bishop of the Los Angeles Diocese provided some funds to help finance the construction of a small school. This was a simple structure on Eureka Street where the present school now stands.

By the fall of 1898, the school had grown to an enrollment of 40 students. Assisting the Ursuline Sisters were Immaculate Heart Sisters from San Bernardino and two lay teachers. In 1908, with an enrollment of 85 students, the Sisters of Mercy of Los Angeles arrived and began teaching. By this time, the original building had been enlarged to four classrooms, and a second story was added in the fall of 1911.

In 1938, the Dominican Sisters of Springfield, Illinois succeeded the Sisters of Mercy. It was at this time that a ninth grade class was added with only six in this graduating class. A tenth grade began in the fall of 1939, but after 1940, the school was again limited to grades one through eight. In the fall of 1986, a kindergarten class was added with an enrollment of 40 students.

Under the direction of the Dominicans, the school kept pace with the growth of the parish, making a building program necessary. In the spring of 1948, construction began on four new school rooms, offices and a hall. Further additions included two more classrooms in 1951 and another two in 1956. With this addition, each grade had a separate classroom, and these classrooms remain in use today.

In June of 1992, the Dominican Sisters concluded their service at Sacred Heart School ending a 54 year history of academic and spiritual leadership. Following the Sisters departure, and for the first time in the schools 95-year history, a lay principal and all lay staff led the school.

More than half of the Faculty and Staff have served Sacred Heart Academy for more than eight years, continuing the stability that helps our students feel secure. 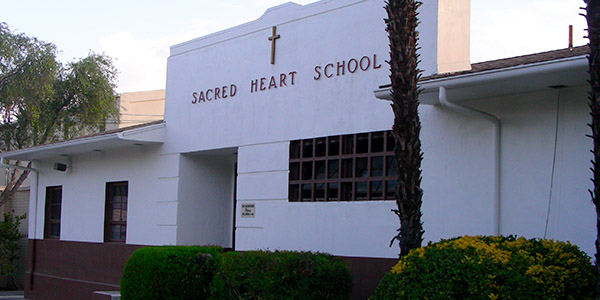