History of Our Lady of the Assumption School

Our Lady of the Assumption parish was established in 1954. The school was built four years later. The founding pastor was Father Peter Mimnagh. After an appeal from the Bishop of San Diego, four Sisters of Mercy from Sligo, Ireland, arrived to staff the school. Sister Mary Francis Paula Lavan was the first principal.
The school started with six grades, first through sixth. In 1959, grade seven was added, and the class was held in the auditorium. In later years, this building was remodeled and became the seventh and eighth grade classrooms. The Sisters of Mercy alone staffed the school for the first five years. Then, in 1962, Mrs. Caroline Nunley, the school's first lay teacher, joined the staff. Over the years, the number of Sisters has declined, but two of the Sisters remain especially active in the school. One is the Parish Director of Religious Education and previous Principal, Sr. Maura Redington. The other, Sr. Camillus Gavigan directs the school Choir. In 2003, the first lay Principal, Mrs. Sue Long, began her service in the capacity of Administrator.
A library was added to the school in 1967. In 1970, the Parish hall was built, and in 1977 it was extended to meet the growing needs of the Parish and school. In 1979, Julius and Margaret Bortell donated funds that were used to add the two-room Bortell Center to the existing school. One room is currently being used for the Kindergarten class which was added to the existing grades in September, 1985. The other room of the Bortell Center will serve as the preschool, slated to open in 2014. In 1984, a new religious education office was completed, and the Principal's office, the secretary's office, and the teachers' lounge were remodeled. In 1993, counters replaced the tables in the computer lab. Recent additional improvements include installing new playground equipment, grading and reseeding the field and area in front of the school, installing new phone, air conditioning, and intercom systems, repainting all parish structures, Internet access and interactive white boards in all classrooms, and the installation of fencing and gates surrounding the school. In addition, asbestos has been removed from the student bathrooms, new tiling has been added to the hall, and the tile, carpeting, and cabinets in the Bortell Center were upgraded in November, 2006. Plant improvements funded by a generous grant from John and Dorothy Shea Foundation included the 2013 repair and re-roofing of the entire school plant, improved fencing and security measures, environmentally friendly windows and blinds in all classrooms, and new carpeting throughout the school. Computers are updated yearly in the computer lab, stations are available in all classrooms, and a mobile computer lab has been added for use by all students. A 1:1 iPad program was implemented in grades 4-8 in 2013.
In 2008, the school celebrated its 50th anniversary. Alumni, their families, current and former teachers, and parish members joined in the celebration. In May of that year, Bishop Rutilio Del Riego hosted our 25th Annual May FunFair Mass and opened the festivities.
Many of the children and grandchildren of our past pupils continue to enroll, and our current principal is a former student. The establishment of an alumni outreach committee was very effective in contacting students to participate in our 50th Anniversary celebration. We are also in the process of updating the data base of our students, past and present.
With pride in the past, faith in the future, and a firm commitment to the value of Catholic education, Our Lady of the Assumption School looks forward to many years of continuing service to the community. 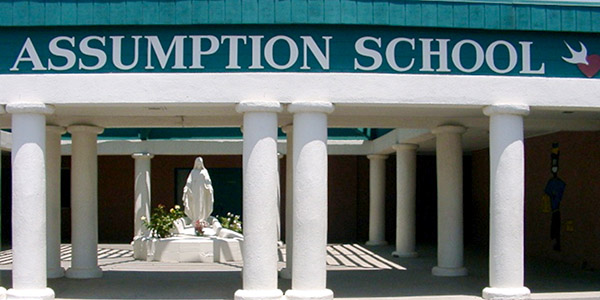