Sacred Heart School has been in existence since 1984 when its' doors on Deep Canyon Road and Fred Waring were opened to receive students in Kindergarten and First Grade. The building had been constructed as a parish hall with three classrooms for religious education. With twenty-one (21) students in Kindergarten and First Grade in 1984, the school continued to add a new class each year. Enrollment growth was clearly foreseen.

The need for additional classrooms and a new school site was addressed in 1991. In the interim, a small staff worked with combined Grades 1-6 in the old school. Kindergarten was housed in the back of the old church.

Once the new school site and size were decided, the pastor of Sacred Heart Parish began fundraising efforts. Parishioners and visitors were very generous in supporting the drive to start the much needed building. Finances were in place and the new building was ready by September 1993. Provisions were made for larger classrooms for students in K-8. The computer room, library, offices and faculty space were great improvements over our earlier limited areas. On September 8th 1993, opening day for the new school, the expanded staff of eight (8) teachers in Kindergarten - Grades 7th /8th combination, welcomed a student total of 210. Soon afterwards, in 1994-1995 the computer room and library were staffed and running. School and programs were debt free by 1997. By 1999, school enrollment reached 291, close to capacity of 310.

In 2002 a three classroom preschool opened with 68 children in the newly remodeled parish hall. Since its inception the preschool has been filled to capacity and a fourth classroom was added in 2003 bringing enrollment in the preschool to 83 students, ranging from 2.5 to 5 years of age.

Continued growth of the valley allowed for growth of the school and in December of 2003 a four-classroom addition was opened. The 6th, 7th and 8th grade classes moved into these classrooms making space available to double Kindergarten and first grade. The computer lab moved into a new full size room and the library expanded into a portion of the old computer room. In the math/science room lab stations were added making hands on experiments possible. The latest in multi-media technology was added to each of the new rooms.

After many years of hard work, Sacred Heart School applied for and was awarded the National Blue Ribbon Award. The designation by U.S. Secretary of Education Margaret Spellings is the highest to be bestowed on a number of schools in the nation each year, and places Sacred Heart School among one of 250 schools across the nation to be so recognized in 2006. SHS is the first school under the direction of the Office of Catholic Schools of the Diocese of San Bernardino to receive the award.

In June of 2007 the Margie Speck Building, named for a generous donor, was opened making it possible to double 3rd, 4th and 5th grades. In addition, separate art, music and extended care rooms are part of this expansion. In addition to the classrooms, a larger play field was added. At the same time refurbishing the existing classrooms and adding the latest educational innovations to all classrooms was achieved.

Over the 2008-2009 school year the remaining four classrooms were opened allowing for the doubling of seventh and eighth grade along with a separate junior high library. As well the new Parish Hall/Gymnasium was opened including a full service kitchen and eating area for the students. Sacred Heart School now services over 550 students and is well equipped to provide an academically sound, faith-filled education for generations to come. 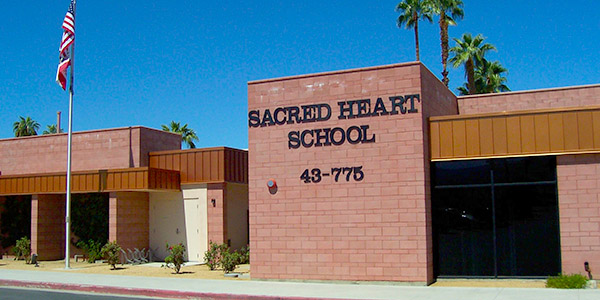