With the growth of Chino's population at the turn of the century, the priests from San Gabriel and the Plaza in Los Angeles began to visit Chino for Sunday services. A Catholic church with a resident pastor had existed in Pomona from 1886, but until 1919 the padres from the old Missions continued to serve as they always had, riding the train in every Saturday afternoon and departing the next afternoon.

The first Masses were celebrated in the home of Mr. Lindo, the town jeweler. Finally plans for a church were made in 1902 and, with the aid of several interested families, enough funds were found by the next year to build the first Catholic church, Our Lady of Guadalupe, on the corner of Third and "D" Streets. It was a small frame building with a seating capacity of 120.

In 1947 the parish was divided and St. Margaret Church was constructed on Central Avenue. Seven years later, in 1954, the original church at Third and "D" was torn down to give way to a new church executed in part by highly skilled artisans from Mexico. If the Mission padres of old who loved Chino Valley so well were alive today, they would be pleased. 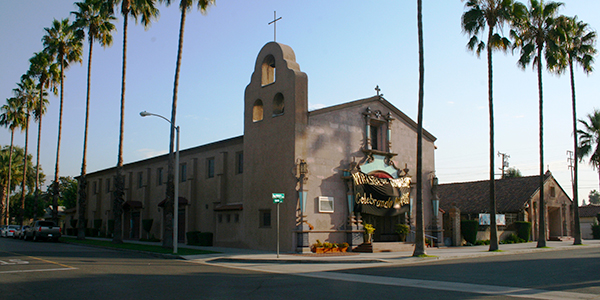