Prior to 1965, Sun City's retired Catholic population either had to travel to St. James parish in nearby Perris or celebrate Mass once a week in the Sun City Town Hall.

A substantial donation by local resident Vincent Carbo changed that. The parishioners of St. Vincent Ferrer broke ground for a new church in October 1965. At the time, parish membership was at 512 families. A rectory was completed in the fall of the same year, eventually to be followed in 1981 by the construction of a Church Hall.

Since those early days of a seniors-only community, St. Vincent has opened its doors to an increasingly diverse population. Reflecting the blending of cultures resulting from new membership, St. Vincent celebrated its first Quinceanera in 1996. With an upsurge in home-building and new families moving into the area, the once unknown youth religious education program now boasts more than 400 children from K-12. Parish membership has soared to 2000 families.

Besides involving gifted individuals in the liturgical ministries, St. Vincent also plays host to a number of other ministries, including Faith Formation for both children and adults and community ministries, which include a Health Ministry, Transportation Ministry for shut-ins, St. Vincent de Paul Society and a Pro-life ministry. 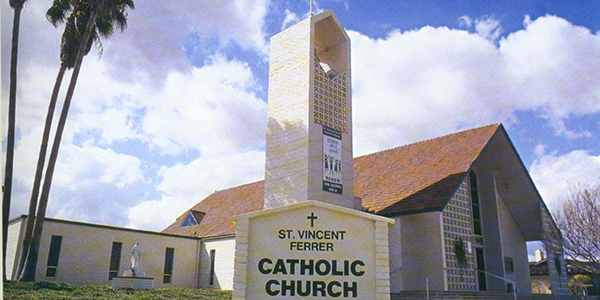