The Catholic church in the San Jacinto Valley began humbly with Masses offered by itinerant missionaries in a small chapel within the walls of Casa de Loma (House on the Hill), more commonly known in later years as the Pico Ranch. About 1886 Francisco Estudillo of the Pico Family donated a piece of land running along Seventh Street from Victoria to Santa Fe Street. On it was built St. Anthony Church. Dedication of the small white church with the towering steeple took place October 20, 1892.

During the first years no resident priests served the few Catholic parishioners. Later Catholic families could come for worship from Winchester, Perris, Hemet and Lakeview. Priests from the Indian School in Banning offered Mass and ministered to the Catholic families and Fr. Hahn eventually had a room built onto the back and east side of the building where priests could stay overnight.

In 1908 Fr. William Hughes became the first resident priest. He is credited with building the Mission at Soboba Indian Reservation, later named St. Joseph. The present church was constructed in about 1939 and dedicated in 1940. 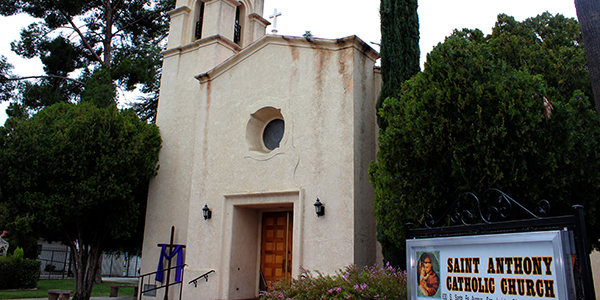