History of St. James the Less

Franciscan Fathers from Mission San Juan Capistrano cared for the early settlers in the area of the Southwest, still known as Indian Territory. The first Mass was celebrated on the feast of St. James the Less, May 1, 1907, by one of the missionaries at the site of what later would fondly be known as the "Old Church" on the site of today's Farrell Hall of St. James School. The Old Church at that time was considered the oldest building in the Pinecate Township. First used as a one-room school, then as a church for Protestant groups, it finally became home to St. James. Pioneer families like the Farrells, Sweeneys, Saunders, Trujillos, Rodrguezes and Bernasconis were parishioners.

Pinecate was the name of Perris before the new town was planned and named for Santa Fe Railroad engineer Fred Perris. In 1936 Perris became part of the newly created Diocese of San Diego, and Bishop Charles F. Buddy sent the Servite Fathers from Chicago to care for the community. In 1941 Fr. Michael Scanlon became the first resident pastor. In 1952, Dom Cornelius Waldo, O.S.B., came to Perris and in 1957 built the present church.

Much transpired in the next 50 years. A parish school, which flourishes to this day, was built and staffed by Irish Sisters of Mercy in 1964. A population explosion brought new residents from Mexico and the Los Angeles southland seeking affordable housing.

Today St. James flourishes with more than 2000 registered families and many active ministries associations and groups, from prayer and young adult groups to Cub Scouts. The challenge of the future is much like that in the pioneer days: to provide facilities to meet the spiritual, educational and social needs of the people of God in Perris. 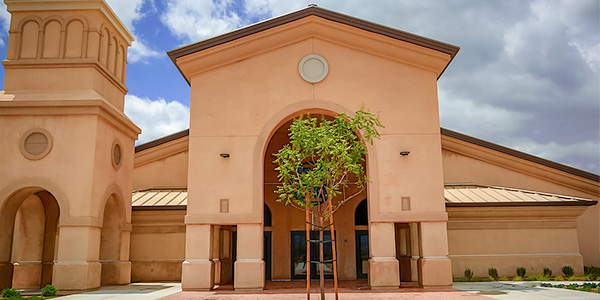