The first Mission Church, precursor of Our Lady of Guadalupe, was built in 1917 by Franciscans on the Agua Caliente Reservation. Later it passed into the care of a secular order and in 1930 a new church was erected and transfer made from the Diocese of Los Angeles to that of San Diego.

In 1935 an earthquake critically damaged the church. A barracks building left over from word War 11 was remodeled and subsequently served as worship center for almost 30 years. In April 1957, Fr. Thomas J. Flahive became pastor. Groundbreaking for the present church took place in March 1963 and the first Mass was celebrated in November 1964.

Originally the church was known as St. Florian Chapel, named after Fr. Florian Hahn, a director of St. Boniface Indian School in Banning. The name was eventually changed to Our Lady of Guadalupe.

The dignified beauty and simple elegance of the present building was described by some as "a jewel." The new church came into being through the generosity of the people and friends of Our Lady of Guadalupe and the Agua Caliente Reservation. 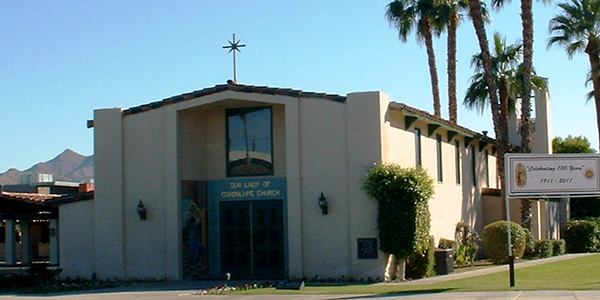