Sacred Heart Parish was established in Palm Desert in 1956 with Fr. A. G. Edwards as pastor. The small church, which faces out on Deep Canyon Road, seated 350 people and is still intact as an integral part of the beautiful edifice built in 1986 that now dominates the campus and seats 1300.

In 1984 Sacred Heart School opened its doors to receive children in kindergarten and the first grade. The structure that housed the school consisted of a hall and three classrooms. In the near future, this hall will house the pre-school that will open with full enrollment in fall 2002. By 1991 the school had grown to such proportions that a new building was proposed. Under the leadership of Fr. Anthony J. Timlin, the nine-classroom school opened in 1993 and flourishes under the guidance of Sr. Joan Griffin, O.S.F.

Fr. Howard Lincoln took over the pastoral leadership of Sacred Heart in 2002 and is presently working on new plans as the parish continues to grow with great activity and energy. 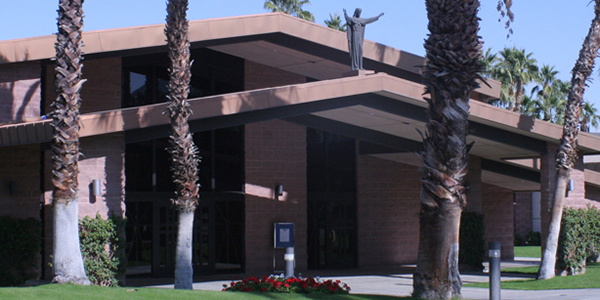