Ontario was founded as a Colony of Ontario in 1882 by George and William Chaffey who named it after their home province, Ontario, Canada. Pioneer Catholics had to ride over rough roads by horse, carriage or wagon to Pomona for Sunday Mass. Several years before the beginning of the 20th century, a large room was offered for worship in a bank building, and priest would travel from Pomona to celebrate the liturgy.

A land purchase allowed St. George Church, the seventh in Ontario, to be erected. It was dedicated in 1899 in honor of St. George, the patron saint of Bishop George Montgomery who presided. The parish was established in 1905 with Fr. Garriga named as the first resident pastor.

Fr. Becker, the pastor in 1917, gave approval to a small group of dedicated women to make plans for a parochial school. In 1920 the Sisters of St, Joseph of Orange arrived to staff the newly constructed school, which opened in 1921.

When the congregation had long outgrown the church, land was purchased across the street and plans were drawn for a new building which came to dominate the skyline of downtown Ontario. Dedication took place in 1923.

In 1972, because of the growth of the congregation and the exorbitant cost of repairs, it was decided to build a new church. Construction began in 1974 and the church in use today was dedicated in 1975.

In 2002 Bishop Gerald Barnes blessed the spacious Pastoral Center and the first phase of the new St. George School. Present parishioners look forward to building stronger community bonds in the multicultural family that makes up the parish today. The current pastor is Fr. Arturo Monzo-Balagat. 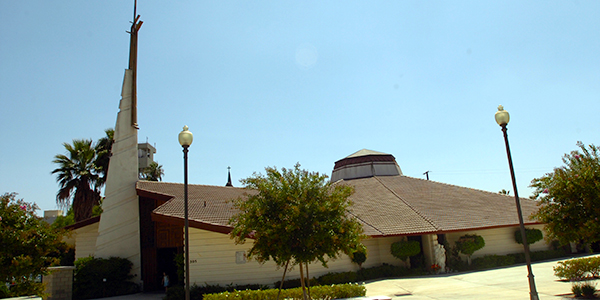