History of St. Joseph The Worker

In 1959, when the scent of orange blossoms filled the air, the faithful in Bryn Mawr and Loma Linda were filled with anticipation of the groundbreaking for the new Catholic church to take place on May 25.

Before the advent of urban development in the late 1970s, most of the inhabitants of the area were laborers in the citrus industry. St. Joseph the Worker was chosen as patron of Loma Linda and the parish. Originally, however, at the request of the donor for the purchase of a school that served as a temporary worship space, the Houihan parish was named for the Sacred Heart.

Fr. James Houihan, the first pastor, offered the first Mass on August 6, 1944. Serving the parish from the beginning were the missionary Sisters of Our Lady of Victory.

During Fr. Josh Snoj's tenure, beginning in 1956, the parish outgrew its building. With a donation of land in 1958, both a church and a rectory were erected and dedicated in 1959. Sacred Heart Parish of Bryn Mawr became St. Joseph the Worker Parish of Loma Linda.

The 1980s saw a period of renewed growth in southern California, and with it increasing diversity of cultural backgrounds among the many immigrants who poured in from everywhere in the world. Daily Mass attendance, recitation of the rosary and adoration of the Blessed Sacrament have filled the parish with joy and united dedication to Christ and his mission. Vocations have increased and parishioners are receiving leadership training for studying and teaching the Word, participating in the liturgy and growing in prayer. 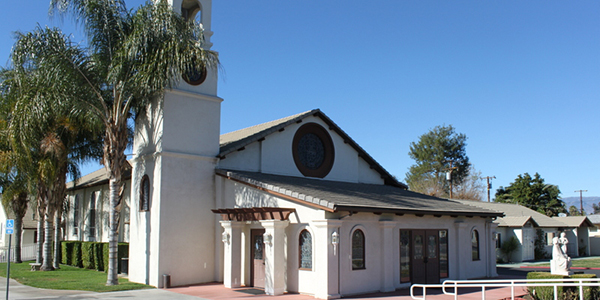