History of Our Lady of The Lake

Until 1939 the few Catholic families in the Lake Arrowhead area were served by visiting priests on irregular schedules. They met for the celebration of Mass in schoolhouses, fire halls and other places not identified as churches.

As the natural beauty of the area attracted more and more permanent and part-time residents, the need for a fixed location was fillled by leasing a small wooden structure in Meadowbrook Woods, later to become known as Crest Park. When the property was later purchased and the building remodeled, the parish received its present name, Our Lady of the Lake Catholic Church. It was not given a resident pastor, however, and was served by various priests for Mass on Sundays.

In September 1943, Our Lady of the Lake formally became a parish with the assignment of Fr. Luke Studer as pastor. Fr. Studer died just one year after his arrival, but not until he had planted the desire to build a shrine to Our Lady of Fatima in the beautiful setting of the parish grounds.

Fr. Michael 0'Duignan was made pastor on November 15, 1945, and dedicated himself to fulfilling the dream of Fr. Studer. Fr. Michael completed the planning and construction of the Shrine and had the joy of participating in its dedication on August 16, 1953. In 1974 Msgr. Tullio Andreatta built the inspiringly beautiful church that serves the community of Lake Arrowhead today. 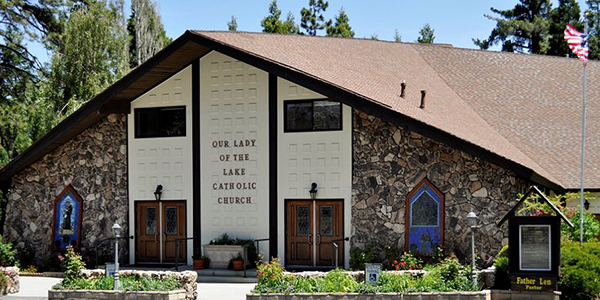