San Salvador Parish, Colton, is second in age only to the mission parishes of Southern California. In 1830 Franciscans from San Gabriel Mission built the first chapel in what is now known as the San Bernardino Valley. It was considered an asistencia or mission outpost and was located in Rancho San Bernardino, one of some 31 ranchos owned by San Gabriel Mission.

The first settlers arrived from Abiquiu, New Mexico, in 1842 and celebrated their first Mass in 1843. The communities of Agua Mansa, La Placita and Jurupa Rancho were combined into the township of San Salvador. Over the years, several chapels and church edifices were built and destroyed either by fire, flood or age. The church immediately preceding the present building was erected with a bell in 1918 on the corner of 7th and "L" Streets. The bell still calls the faithful today.

Integral to San Salvador's history is the impact on the community of Fr. Jose S. Valencia. Born in Michoacan, Mexico, in 1894, he served the parish from 1937 to 1966, when he died in a tragic accident. He revived the parishioners to devotion and dedication to Jesus Christ. Many remember his dramatic Lenten and Easter services. The community of Colton and San Salvador has proudly given four priests to the service of the Church.

San Salvador celebrated the 150th anniversary of the first pastor appointed to the parish, Padre Amable Petithomme, SS.CC, who arrived on September 15, 1852. The joyous occasion was joined with the parish's annual Fiesta in the fall of 2002. 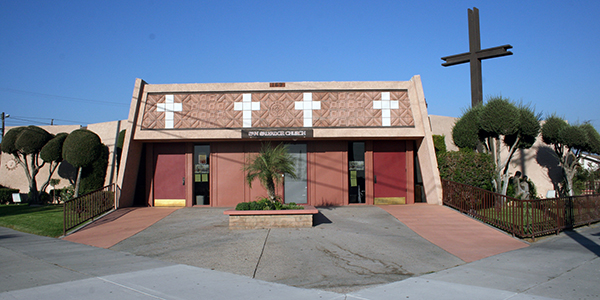