History of Our Lady of Soledad

"The first Catholic Church erected between the city of Banning and Arizona was built in 1923-1924 in Coachella. It is known as the Old Church on First Street. It was dedicated under the title of Our Lady of Soledad on December 24,1924.

Franciscan Missionaries traveled to Coachella from Banning by train on weekends to evangelize the Indians of the region when the parish was only a mission chapel. Woodcutting was the main industry because of the abundance of Mesquite trees and the ready labor force of the Cahuilla Indians. Since wood was shipped by rail, the railroad station was the impetus for the growth of the community.

In 1927 Our Lady of Soledad became distinct from Banning and was part of the Los Angeles Diocese. It is therefore the Mother Church of the Coachella Valley and currently serves Sacred Hearts of Jesus and Mary Chapel, Torres-Martinez Indian Reservation, San Felipe de Jesus and Mission Senor de la Misericordia.

In 1934 with the development of vegetable farming, especially of sweet onions, people established homes and families. The coming of the Missionary Sisters of Our Lady of Victory provided catechetical instruction and preparation of the children for the sacraments. They taught in homes, beneath Tamarisk trees and in the open fields. They visited the sick and fed the poor.

The old church was enlarged at least three times before ground was broken for a larger structure on March 7, 1971. The church, now located on Oasis Palms Avenue offered the first Mass in 1971 on the feast of Our Lady of Guadalupe and was dedicated in 1972.

The parish became part of the Diocese of San Bernardino when it was created in 1978. Today parishioners enjoy all the services offered by the Diocese and continue in the deep faith of their predecessors as they work, pray and celebrate their unity in diversity." 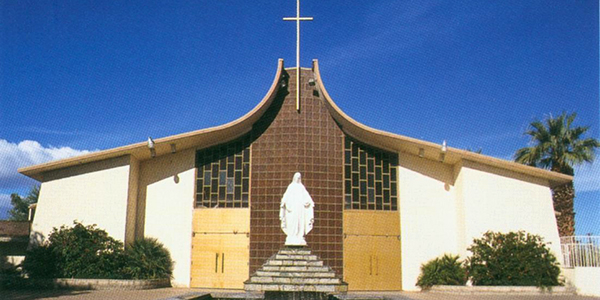