Sacred Heart Parish sits in a twenty mile long highland valley at a level of four thousnad feet, surrounded by highter mountains. Over 28 square miles, in the center of the valley, is the Cahuilla Indian Reservation, and approximately ten thousand other residents are spread around on lots of two acres or more, a widely scattered community of small "ranchers" and retirees.

The church was established in 1979 by Fr. Charles Devine, commuting from Idyllwild. The original worship space was a converted real estate office, 20 by 45 feet. Within a year a new portion was added, which housed a small auditorium, an office, and a kitchen to serve all festivals. The chapel was dedicated on October 13, 1984. Fr. Bernard Carr came as pastor in 1989, and took up residence in a single wide mobile home on the church lot.

Succeeding pastors were Fr. Robert Tomkins and Fr. Robert Wiley, a Marist. Both priests resided in rented quarters three miles away to allow the rectory to be used for an office and a Christian Doctirne Center. Fr. Wiley died in office in November, 2005, and Fr. Hilary Fischer, MSC, a newly returned missionary, was appointed. Before he took over, the parish council met with Fr Fischer, and said the parish could no longer afford to rent at the trailer park. Father agreed to move into the trailer on the church lot after it was remodeled, but then it became urgent to get new office and catechetical space. A double wide mobile was bought and installed, with sidewalks, ramps, and parking space built by parishioners who gave their time and even materials. These volunteer workers also insulated the church to cut down on heating costs. Two large containers for a newly established "Food for the Faithful" have fairly filled our small lot. At present 60 poor families receive food monthly.

Changing demographics of the valley have kept the parish poor. The Anglo retirees have largely been replaced by poor Hispanics working on the "ranches" and potato fields. A Spanish Mass has become a permanent addition, while the three Reservations now have their own pastor, they are still welcome at Sacred Heart and frequently come. The parish has enthusiastically embraced the Diocesan Stewardship Program and place our hopes for the future on carrying it out. 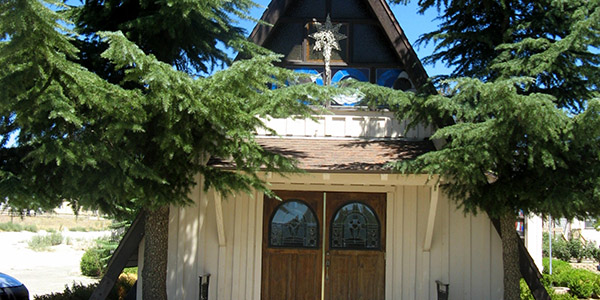