Our Lady of Guadalupe Parish, San Bernardino, had its beginning as a mission of St. Bernardine. A tremendous growth in the Hispanic composition of the congregation occurred with the flight of refugees from the Mexican Revolution. Pressure to have a separate Hispanic education for the children led to organizing a parochial school in 1919.

Exactly when the school came into use for Sunday Mass is unknown, but by 1922 Mass was being offered there. Soon after, the school was moved to a site at Fifth and Sanford (now known as Pico). The school became a weekend mission under the title of Our Lady of Guadalupe.

Early in 1925 Fr. John 0'Dowd was assigned to organize a parish and build a church, which was dedicated on the feast of Our Lady of Guadalupe 1925. The next year Fr. 0'Dowd was replaced by Fr. John Rossi who was pastor from 1926-1931. From 1931-1939, the Augustinian Recollect Fathers from Spain ministered in the parish. 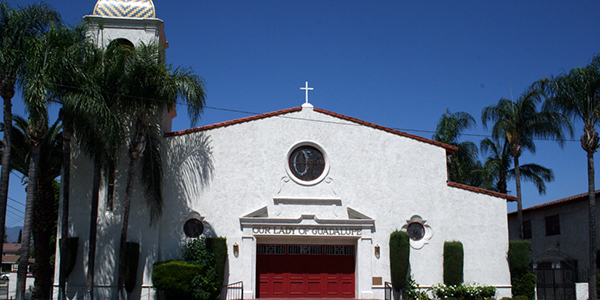