History of Our Lady of The Rosary Cathedral

Usually located in a main city of the Diocese, it is often larger than other churches and graced with beautiful works of art in its windows, doors, statuary and other decorations. It represents all the people, priests and deacons of the Diocese united for service to the Diocese. It is the hub around which the people gather to be and promote Gods Kingdom.

Holy Rosay, San Bernardino, was established by the Most Rev. John J. Cantwell, Bishop of Los Angeles, on October 7, 1927, the Feast of Our Lady of the Rosary. Fr. Patrick Curran became its first pastor.

Soon it became necessary to build a new church in the north section of San Bernardino. The declared boundaries of the parish were 14th Street on the south, 40th Street on the north, Lytle Creek Wash on the east, and Interstate 215 on the West.

The first services were held the last Sunday in October 1927, on Christ the King, in a rented house on Sierra Way, which served as temporary church and rectory. Three lots on the corner of 25th and Arrowhead Avenue were purchased. Construction began in May 1928 and the church was dedicated on the Feast of the Holy Rosary by Bishop Cantwell. Following the death of Fr. Curran, Fr. Thomas O'Sullivan became pastor and Fr. Thomas A. Matthews succeeded him in 1933. In 1936 a fund was setup to build a nine-room rectory next to the church.

The duties of the priests of Holy Rosary parish were many. They were chaplains of St. Bernardine parish, county and state hospitals and Indian Reservations. They also celebrated Mass at Lake Arrowhead. With the growth of Southern California after World War II, Holy Rosary School was built, dedicated on December 1946 and opened January 1947 under the Dominican Sisters from Houston, Texas. A new convent and a new upper grade school were built in 1955, the latter named Holy Rosary Academy.

In 1958 Msgr. Matthews became gravely ill and remained hospitalized until his death in December 1961. Msgr. John P. Bland succeeded him, retiring in March 1976 with the title Pastor Emeritus. Fr. Phillip Straling was appointed pastor in April 1976 and remained in leadership until his appointment as Bishop of the new Diocese of San Bernardino in 1978. Holy Rosary Church then became Our Lady of the Rosary Cathedral.

Fr. John Pomis succeeded Bishop Straling as the first rector, and was followed by Frs. Vince Walters and Peter Covas. In spring of 1997, Fr. Al Lo Pinto undertook the task of renovating the Cathedral. He and many dedicated parishioners devoted time, talent and treasurer, together with perseverance and determination to see the project through. Fr. Robert Miller succeeded Fr. Lo Pinto in July 1997, renovating the hall and expanding the parking lot. 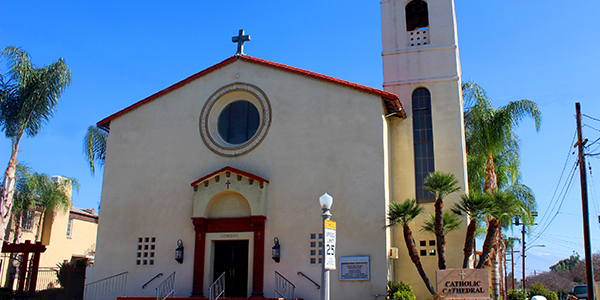