St. Thomas the Apostle School in Riverside, CA was first opened and staffed by the Sisters of St. Francis in 1946. The original classrooms were located at Sherman Indian High School, which was known as the Mission School, with an enrollment of 77 students in grades one through four. The following year the classes moved across the street to its present location at 9136 Magnolia Ave. In 1953 four more classrooms were built to accommodate the 271 students enrolled. In September of 1981 a portable classroom was purchased for the first kindergarten class of 25 students.

In 1996 the first student computer lab opened in the friary and was relocated to the parish hall in 1999. Portables were purchased in 2001 to house the library, bookkeeper's office and faculty/staff work room. New playground equipment was purchased and installed as well as new tables and a covered outdoor eating area. Security fencing was put into place around the school's field/playground during the summer of 2004.

St. Thomas the Apostle School takes great pride in its past and its commitment to Catholic education. All grades have part time educational classroom aides who assist in the classrooms. The junior high classes are departmentalized and kindergarten is an all day program. The enrollment has remained steady since the school first opened in 1946. The administration, faculty and staff continue to provide a curriculum and an environment that is nurturing, safe, and most importantly, Catholic in its foundation. 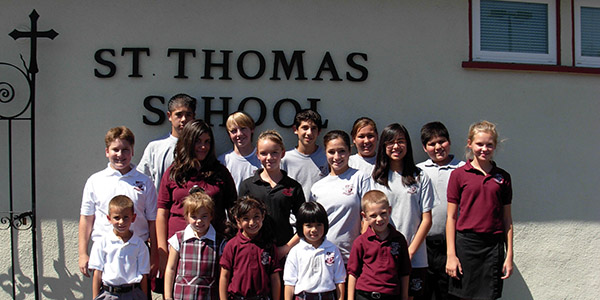