St. Ann was Needles' first Catholic church, built in 1888 under the direction of Fr. Ferrari. But its origins go back a century earlier. Fr. Francisco Garces, who led an expedition up the Colorado River to Needles, offered the first Mass in 1774. A mission of Yuma, Arizona in the Tucson Diocese, the church was built by united community effort on the corner of 3rd and "D" Streets. In 1921 it was consumed by fire and immediately rebuilt later that year.

Originally under the jurisdiction of the Diocese of Tucson, it later belonged to the Dioceses of Monterey-Los Angeles and San Diego before coming under San Bernardino. Several factors have made the church a tristate community of a multicultural mix: the building of 1-40 to Route 66, the growth of Laughlin with its casinos and the proximity of Bullhead's shopping centers. Travelers, snowbirds from many states and Canada and local residents alike are discovering St. Ann's as a spiritual oasis arising from its historical status. 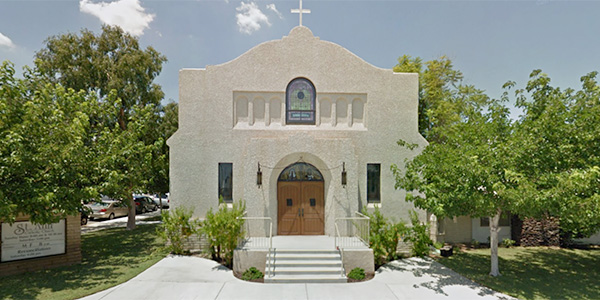