History of Christ The Good Shepherd

Fr. Carmine Porro, pastor of Oro Grande's St. Cecilia, received permission from Bishop Charles F. Buddy in May 1960 to build a Mission Church in Adelanto. Mr. and Mrs. Nick Notterman, who had assisted other High desert parishes financially, came to the rescue. They donated two acres of land between the elementary school and Highway 395 and another 40 acres in the area, which were sold to pay the entire cost of constructing the proposed church.

By late 1962, Fr. Robert J. Erickson arranged for the Bishop to dedicate Adelanto's Christ the Good Shepherd Mission in May 1963, and moved to Adelanto, becoming the full-time pastor of the newly elevated parish.

In the late 1960s, the construction of 750 units of family housing on George Air Force Base drew people away, and the number of Catholic families decreased by more than half. However, by 1969 Mrs. Notterman had established a trust fund that made possible the construction of a multi-purpose building with , a kitchen, an office and three classrooms for religious education.

For several years following, the parish had difficulty meeting expenses. The annual deficit continued to rise until a weekly social (bingo) providently flourished and finally generated sufficient funds to keep the parish viable.

By the mid-1970s, population in Adelanto took an upturn so that, after a quarter century of hard times, the Christ the Good Shepherd once again began to flourish. 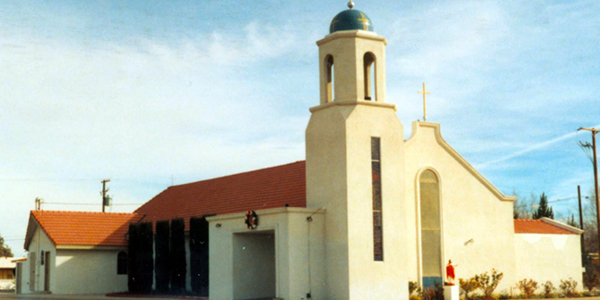