Soon a commercial building at Tamarack Road was leased in February 1992 for use as a temporary church. Renovations and construction were completed in March, and the first Mass was celebrated in Holy Innocents Church on the feast of the Annunciation 1992.

Fr. Thomas Keller, who had become Parish Administrator on January 1, 1996, was followed by Fr. Mark E. Kotlarczyk on July 1. Three years later to the day, Fr. Kotlarczyk began a six-year appointment as the second pastor of Holy Innocents Parish.

He was to see growth. Between June 1992 and May 2002, the number of registered families increased by 25 percent annually, growing from 437 families to 1,525 families.

In June 2000, groundbreaking commenced at the El Evado site for the construction of a 23,000-square-foot multipurpose building, which would house Holy Innocents' worship space, offices and religious education classrooms. On June 29, 2001, the Parish of Holy Innocents celebrated the first Mass in the new house of worship. 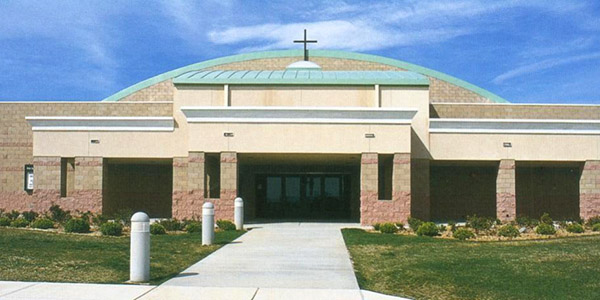