History of Our Lady of The Snows

In 1908 the Wright Family decided to raise horses in the valley where Wrightwood is now located. Ranching required ranch hands who needed a place to stay. Accordingly, a bunkhouse was built, which after a number of transitions, providentially became Our Lady of the Snows Catholic Church.

The complicated history began when, after some 20 years, the Wrights' bunkhouse was expanded and converted into the village's first schoolhouse. When a permanent school was built, the property was sold to the Horan Family of Los Angeles, who ran a church supply business. About 1940, the Horans sold the property to the Sisters of Social Service, who, until it became too small, operated a summer camp for the city children at the site. The Sisters, in turn, sold the property to the Diocese of San Diego in 1946.

That year, Bishop Charles F. Buddy announced the founding of a new parish to be located in Wrightwood. He called it Mary, "Star of the Sea," after the Sisters' camp, Maria Stella Maris. However, the pastor and parishioners were never happy with that name. Our Lady of the Mountains, Our Lady of the Pines, Mary of the Stars were suggested. Finally all involved decided upon Our Lady of the Snows, whose feast is August 5.

The parish is served by the pastor of Blessed Junipero Serra Church, Phelan. 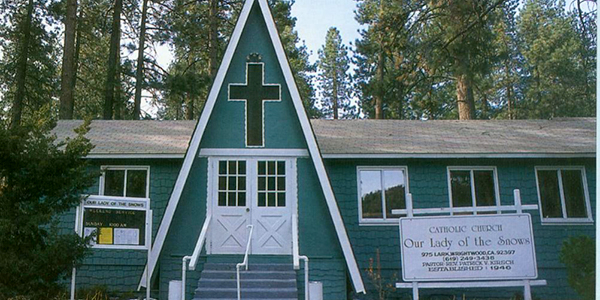